Call of Cthulhu Shadows Over Stillwater

A collection of scenarios and settings for Down Darker Trails—the Wild West setting for Call of Cthulhu and Pulp Cthulhu. Contained within are further insights and challenges for those seeking bold adventure in the American Old West.

A three-part campaign, The Shadow Over Stillwater set in the mountains of the New Mexico Territory. A hunt for a fugitive murderer leads the investigators into a mystery involving odd townsfolk, strange lights in the sky, walking corpses, and the machinations of a once-powerful and ancient race seeking to reclaim their lost glory.

Beneath the Burning Sun sees the investigators arrive in the town of Shade in Valenica County, New Mexico where they become embroiled in a desperate bank robbery and join a posse to track down a gang of ferocious outlaws led by a crazed preacher and a hardened gunslinger. A bloody trail leads to an abandoned Spanish fort high in the Cebolletas where death waits. This scenario can be played as part of the larger campaign or as a standalone adventure.

Stonegarden expands the Down Darker Trails setting. A booming mining town in Arizona, tucked away in the Coyote Mountains, this locale provides a new and fully realized town in which to base adventures. The history of the region, its locations, and people are detailed, as well as its secrets, threats, and Mythos connections. This new campaign setting presents a community with one of the most violent reputations in the entire West. A place of danger, wild adventure, and dark secrets.

Finally, The Devil’s Round-Up provides an extended adventure seed set in a location that may be familiar to long-time Call of Cthulhu fans. A roster of characters and their agendas are described, ready to darken the day of any investigators who venture into doom-haunted Castronegro.

That’s plenty of adventure to keep your gaming group immersed in the horrors and terrors of the Old West. 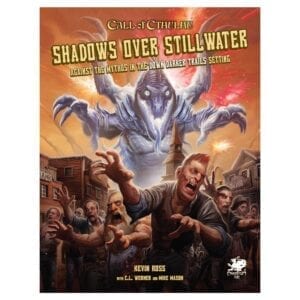