It’s the 1950s in America and life is good. The most destructive war in human history is over and the good ol’ U S of A is starting to flex her muscles as a global superpower. The GIs have all come home to new cars, houses in the suburbs, and the high-tech wonders of jets, television, and rockets blasting into space make it clear that the future is very bright indeed. At least, that’s how it looks on the surface.

Peel away the thin, sunny veneer of everything is A-OK and you find the rot of fear and paranoia. The nuclear genie has been let out of the bottle, and for the first time ever, mankind has the ability to actually murder the entire world. The creeping Red Menace is everywhere. They’ve cut Europe in half, taken over China, invaded some unknown country called Korea, and even conquered outer space with their Sputnik. Worst yet, them godless Commies are already here! Don’t trust your movie stars, authors, news reporters, or even your neighbors. They could all be one of them. Then there is the slow, steady corruption of the youth through promiscuous, unwholesome rock n’ roll and shocking comic books full of gruesomeness like Tales From the Crypt. Never before has our way of life had so many threats to it.

It’s the 1950s in America, and everything looks rosy and perfect on the outside, but beneath the skin fear is rampant. In short, it’s the perfect setting for some Call of Cthulhu action.

In Atomic Age Cthulhu you will find info on how to run games of cosmic horror in the Leave it to Beaver world of the 50s. Background information, new professions, new skills, and adventure ideas tailor made for the 1950s can be found here, along with seven scenarios designed to get you rocking n’ rolling in no time. 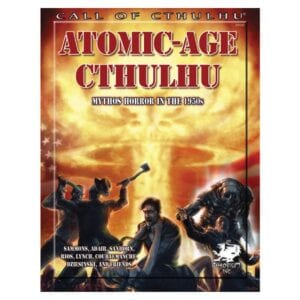