The Armiger Helverin is a fast-moving weapons platform designed to lay down blistering hails of heavy fire while running rings around the enemy’s forces. In place of the close-ranged armaments of the Warglaive, each Helverin bears a pair of Armiger autocannon. Capable of firing hundreds of armour-piercing shells per minute, even a single such weapon can swiftly whittle down infantry ranks or shred armoured vehicles. Armiger Helverins are versatile and highly destructive – small wonder that they are popular amongst both Imperial and Adeptus Mechanicus Noble houses, relied upon to support their larger compatriots at war.

This multi-part plastic kit contains the components necessary to assemble 2 Armiger Helverins. Smaller and more lightly armoured than their larger Imperial Knight brethren, standing at around half the height, they nevertheless share a lot of details – the basic shape of these bipedal weapon platforms are similar to a standard Imperial Knight, with 2 weapon arms, hydraulically-driven legs, tilting plate and a large carapace surrounding the central head of the suit. Another detail in common with those larger suits is their loadout; for their diminutive size they’re incredibly powerful, specialising in ranged combat. Each is armed with 2 Armiger autocannon and a carapace-mounted heavy stubber, the latter of which can be replaced with a meltagun. 4 unique faceplates are supplied in the kit, and both weapons (which feature articulation at the shoulder) and legs can be attached to either side of the model, allowing for some customisation of pose.

This kit comes as 120 components, and is supplied with 2 Citadel 100mm Round bases, as well as an Armiger Transfer sheet. 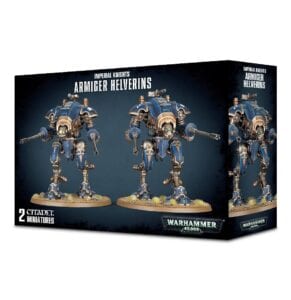